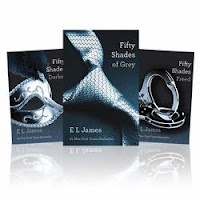 “The book is sparking an interest in light bondage,” says Kim Carlton, manager of Ambiance’s North Olmsted store, one of eight locations in northeast Ohio and Columbus. “Women are reading the book and realizing that bondage isn’t necessarily as hard core as they thought. They are inspired to try new things.” The North Olmsted Ambiance store needed an emergency shipment of soft bondage products from their Sex-and-Mischief line, including sex slings and crops.

The trend holds true at all of Ambiance’s stores, where corsets, floggers, whips, handcuffs and restraint systems are in high demand. Last week, a woman purchased 65 different items for her book club, which discussed 50 Shades of Grey and sequels at its weekend meeting. Carlton says the woman planned to decorate wine bottles with fuzzy handcuffs and hand out other items as party favors. “Light bondage is appealing because you can lose control safely and let someone else take over,” says Carlton.

A customer purchased handcuffs then returned a few days later for an under-the-bed restraint system. “The woman and her husband decided to spice up their love life,” says Carlton. “I think husbands are very happy their wives are reading these books—and responding!”

Since 1981, woman-owned Ambiance has been enhancing the love lives of committed couples at stores throughout northeast Ohio. Ambiance has won numerous awards for its world-class customer service as well as its commitment to the communities it serves.
Posted by Ambiance, the Store for Lovers at 12:26 PM